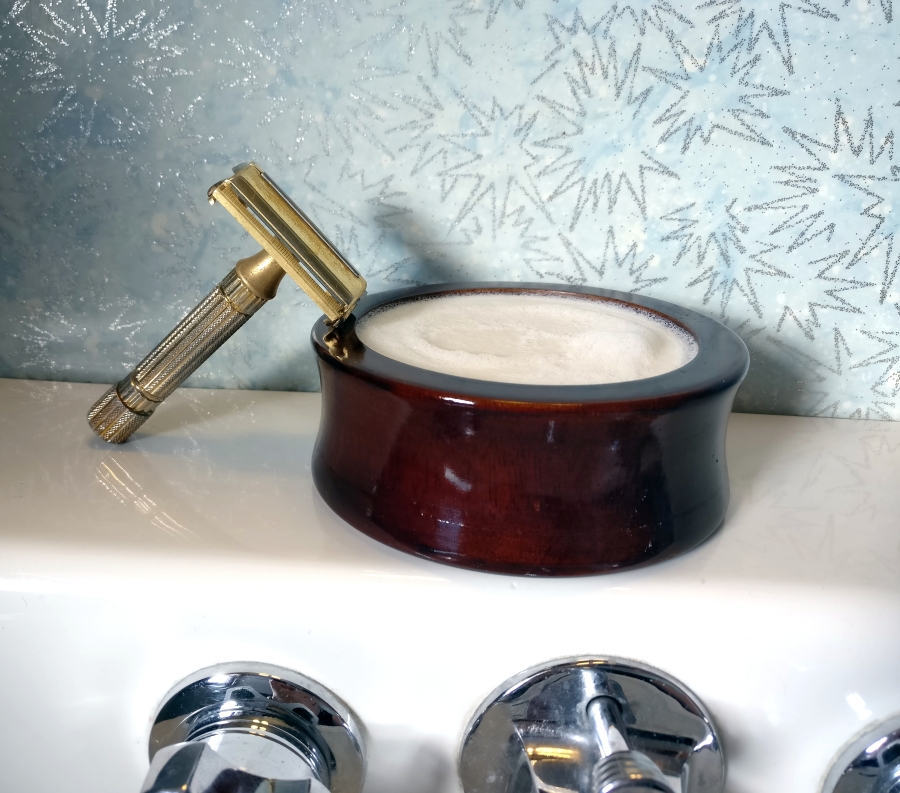 I decided to try two new things today, since my lovely wife gave me both of them for my birthday the other day.  A new puck of Mitchell’s Wool Fat soap, and a 1948-50 Gillette Aristocrat. I’ve never used either before today, so here’s how this went.

I soaked the Aristocrat in hot water with dish soap in it for a few hours last night and gave it a good rinse to get rid of anything it may have still had on it.  My wife ordered it from Chuck at Shave HQ, and while I know he cleans and sanitizes all the vintage razors he sells, I always make a practice of doing at least a hot water + dish soap soak at a minimum before I use a vintage razor for the first time.  I figure that way it’s at least as clean as the silverware in my kitchen.

Today was day 5 since my last shave, so I had good growth on which to test out a new razor.  Hot shower for prep.

I’ll go into how each new thing performed here.

Mitchell’s Wool Fat soap is known to wetshavers out there as a sought after commodity. It has a reputation of being high quality, very classic/traditional, and a bit hard to lather.

Mitchell’s is a harder soap, which, to my understanding, is a result of its milling process, which removes a lot of moisture from it.  Most of the time, a good rule of thumb when lathering is, “the harder the soap, the more water you should use”.

I didn’t really go into this with that in mind today, but since I’m used to some harder-to-lather soaps I use a lot of water to begin with.  Needless to say, I had a nice, thick lather built in a fair volume almost immediately with Mitchell’s.

It helps that my Parker Chrome Silvertip badger brush holds quite a lot of moisture; even so, I do have to bring up the fact that after my first pass, I noticed that the lather in the brush did need some water. I added a bit of water to the brush and got great lather for my 2nd and 3rd passes.

Mitchell’s has a fair amount of lanolin in it, which makes it satisfyingly slick, even when using it with hard water (like I have now).  With that said, I didn’t note as much residual slickness after a pass as I had been expecting.

This soap provided really nice cushion throughout my shave today, which was a 3-pass face shave plus a 2-pass head shave.  The fragrance is very mild and clean, almost powdery and with a very slight sweet / floral scent to it that does not persist.  I found it very pleasant to lather, to shave with, and to the nose.

I’ve had the Gillette Aristocrat on my list to add to my collection for quite some time now. I’d always heard that they’re great shavers, which just made acquiring one that much more desirable for me.

This one is a 1948-50 period Aristocrat, with a case that is in pretty good condition as well. The razor itself – as is common for gold-plated vintage Gillettes – has suffered some plating loss on the handle and the doors, but it’s cosmetic only. I can’t find any real corrosion or damage to what’s underneath, which is always a good discovery.

Being that it’s a 1948-50, it has no date code on the underside of the baseplate, and no ridges on the vertical blade-bar.  Because of this construction and the look of the razor’s head, I was expecting this one to shave more or less like the 1948-50 Gillette Super Speed that I own.

I could not have been more wrong.  This razor felt a lot more aggressive to me, with a fair amount of blade feel I never noted in any of my Super Speeds.  This is fine by me; I went into this thinking I should shim it, but decided to try this razor as-is for the first shave with it.  I’m glad I left the shim out of it.  Shimming was completely unnecessary.

With a brand new Gillette Silver Blue blade in it, this 1948-50 Aristocrat shaved like a dream.  I was able to easily feel for the optimal angle, and I got a trouble-free 3-pass face shave out of it, and a very easy 2-pass head shave.

A thorough rinse and some vintage 1960s Avon “Spicy” aftershave splashed on, and there was no sting, no nicks… only smoothness.

Mitchell’s Wool Fat soap has a lot of hype out there when you read reviews of it, but I would say that it largely lives up to it.  While I could see it being tricky to get a good lather out of it for a beginner, for an experienced wetshaver who has a good brush and knows how to build a solid, basic lather with enough water, Mitchell’s shouldn’t be any more challenging than a soap made with Barrister and Mann’s “Reserve” base (which is a bit thirsty by most standards).

Slick and smooth, Mitchell’s has an enjoyable but very mild fragrance to it that should not be off-putting to most people, and it’s low key enough to not clash with whatever post-shave product you might want to use.

The 1948-50 Gillette Aristocrat is a more aggressive razor than I was expecting, which makes it a little bit unforgiving if someone needs a milder shave. I like aggressive razors, so I found this one to be very efficient, pleasant, and it left me with an extremely smooth, irritation-free shave with no nicks or cuts.  It might look like a Super Speed, but it did NOT shave like one for me.

As an overall, this was a great combo, delivering excellent results given that I was trying out two new variables today.  I’m definitely going to use them both more going forward, and I’d highly recommend Mitchell’s and the Aristocrat to anyone looking to switch things up.